5 – How to install applets on ArcoLinuxD Cinnamon

Applets are elements in Cinnamon that will get their place in the cinnamon toolbar.

Cinnamon uses applets by default to show many elements in your toolbar.

I had already installed the weather applet in a previous tutorial. We delete it and install it again.

We show you how to get your WOEID to figure out the number of your city. We change the preferences because I thought something was wrong with my vivaldi. I set Firefox as my preferred browser and it works.

Cinnamon uses applets for many things

Icing Task Manager is something I had never used. One of the things it does is show thumbnails when hovering over open applications. Still lots of questions open about this one.

Restart Cinnamon can be used when you are making themes for Cinnamon.

Settings Plus can be used when working on themes among other things. Some of these things point to Debian packages. That will never work.

Remember we are trying out applets
written for Linux Mint.
Not everything will work.

Use asciinema to show what goes on in your terminal

4 – how to install sound to your system

12 moving applications to an different workspace 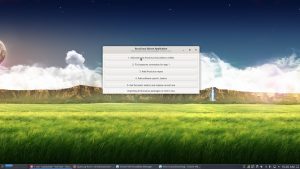